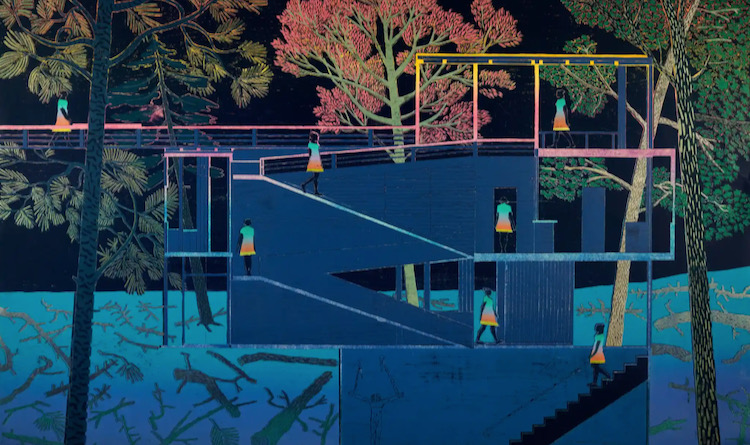 The British artist Tom Hammick is first and foremost a storyteller. With a visionary understanding of the printmaking medium and a beautiful Technicolored palette, he weaves together references to opera, poetry, cinema, architecture, myth and memory.

In Underworld (An Escape), a monumental hand-tinted woodcut measuring almost two metres, Hammick’s work was inspired by Beethoven’s Fidelio . Premiered in 1805, the opera follows the plight of Leonore, whose husband Florestan has been arrested and imprisoned for attempting to expose the corruption of his rival Don Pizzaro. Leonore disguises herself as a man and takes a job at the prison, eventually rescuing Florestan in a musical cry for freedom.

Hammick presents the entire opera narrative in one visual schema, a device he takes from Renaissance predella panels and Japanese ukiyo-e prints. The silhouette of Leonore is repeated across the composition, almost as if her resolve is strengthened in number as she descends into the prison world of glass and wood. Her dress glimmers like a beacon of hope against the pervading darkness. Hammick says: “Leonore is going deep down into the dungeon, like she’s going into the primordial soup of creativity or the cerebral cortex of the brain.” If you look closely, you can just see the outline of Florestan, shackled to the wall, barely carved into the woodcut’s surface. This increasing simplification of form is mimicked by the surrounding nature; the radiating trees become dead branches, flattened like props on a stage.

Hammick made Underworld in 2020 at the height of the lockdown, and it is hard not to read this sublime and frightening work in this context. Liberty and life are inextricably linked. Glyndebourne will exhibit Underworld and other major works by Hammick – the associate artist at Glyndebourne for the past two years, after 20 years as an audience member – in its exhibition programme during the 2021 and 2022 festivals.

You can see more art from Glyndebourne on Art UK here, and find out more on the opera festival’s website.

The Great British Art Tour series is brought to you in collaboration with Art UK, which brings the nation’s art together on one digital platform and tells the stories behind the art. The website shows works by 50,000 artists from more than 3,000 venues including museums, universities and hospitals as well as thousands of public sculptures.